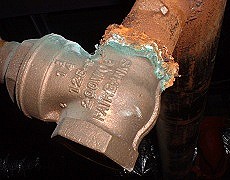 a broader category is defined as the disintegration of a material into its constituent parts, which may be caused by crevice corrosion, microbial corrosion, and high-temperature corrosion.

There are three conditions that must exist for galvanic corrosion to occur:

The Statue of Liberty is perhaps the most famous case of galvanic corrosion. Contact between the wrought-iron support and the outer copper skin amidst rainwater exposure has allowed the structure to gradually corrode. The famous icon’s builder anticipated this problem and installed asbestos cloth soaked in shellac insulation in the 1880s.  This worked for some time until it dried up and became porous, acting as a sponge that held saltwater close to the contact points between the two metals. An inspection in 1981 revealed severe galvanic corrosion of the iron supports, causing them to swell and push saddle rivets through the copper skin. This rapidly worsening situation was the main drive to restore the statue in 1986, when the iron was replaced with a variety of corrosion-resistant steel. The solution has held up, and native New Yorkers and visitors alike have been able to enjoy a landmark free from corrosion that will last long into the 21st century.

Galvanic Corrosion Can be Prevented in the Following Ways

In summary, galvanic corrosion is the disintegration of metals in the presence of an electrolyte. It can occur in homes wherever dissimilar, joined metals become damp.